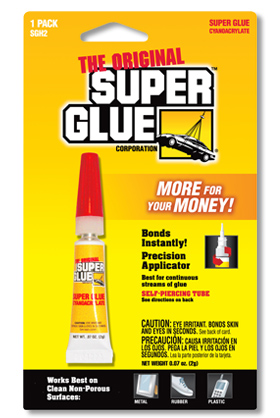 Dr. Coover first happened upon the super-sticky adhesive — more formally known as cyanoacrylates — by accident when he was experimenting with acrylates for use in clear plastic gun-sights during World War II. He gave up because they stuck to everything they touched.

In 1951, a researcher named Fred Joyner, who was working with Dr. Coover at Eastman Kodak’s laboratory in Tennessee, was testing hundreds of compounds looking for a temperature-resistant coating for jet cockpits. When Mr. Joyner spread the 910th compound on the list between two lenses on a refractometer to take a reading on the velocity of light through it, he discovered he could not separate the lenses. His initial reaction was panic at the loss of the expensive lab equipment. “He ruined the machine,” Dr. Paul said of the refractometer. “Back in the ’50s, they cost like $3,000, which was huge.”

In the name of science, Mr. Joyner was not punished for destroying the equipment.