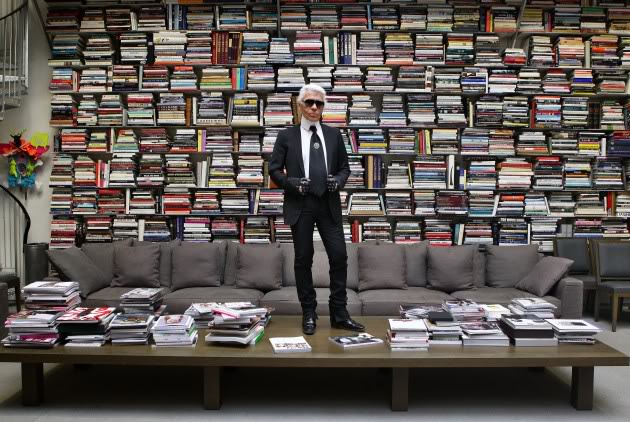 “I go to Colette,” he says, referring to the eclectic boutique on the Rue Saint-Honoré. “I buy all the new things, I buy all the music magazines, listen to new music.” (Last year, Lagerfeld released “My Favorite Songs,” a two-disk CD that included selections by hipster artists like Devendra Banhart, LCD Soundsystem, Super Furry Animals, the Fiery Furnaces, and Stereolab, as well as by the punk band Siouxsie and the Banshees, the bandleader Xavier Cugat, and Igor Stravinsky.) Famous among his friends for his capacity to absorb information, Lagerfeld is also renowned for his ability to translate what he consumes into fashion. “Karl reads everything, looks at everything,” the Paris fashion stylist Camille Bidault-Waddington says. “He’s permanently filling himself with independent culture and establishment culture, so basically he knows everything, and he’s like a sampling machine.” Lady Amanda Harlech, Lagerfeld’s “muse,” concurs. “He said to me once, almost in a worried way, that he has to find out everything there is to know, read everything,” she says. “The curiosity is ceaseless.”
*
Lagerfeld spoke like this, almost without interruption, for nearly two hours. He then nodded discreetly to his hovering manservant, who vanished, then quickly reappeared with a silver salver upon which sat a pitcher of water, an empty glass, a foil envelope, and a spoon. Lagerfeld sprinkled brown powder from the envelope into the glass, added just enough water to wet the granules, then used the spoon to stir the mixture into a thick paste that resembled chocolate pudding but was, he said, protein. He spooned the substance into his mouth without relish, swallowed it, and was soon speaking again, about his plans to reprint the work of a once-popular poet named Anna de Noailles—“who was born Anna de Brancovan, and was of Romanian descent, and who was one of the first women elected to the Académie in Belgium—not in France, because she died in 1933—and her poetry is stunning.…”

*
He spends most of his time in a thousand-square-foot room, at the center of which sat a modern fourposter bed. The posts were made of fluorescent bulbs, and a sable bedspread was strewn with paperbacks and magazines and more iPods. Lagerfeld says that he sleeps seven hours a night in this bed; he also spends considerable time lounging on it during his waking hours, reading and drawing. There was a large desk a few feet away, piled with papers, sketchbooks, magazines, books, newspapers, and art supplies. Lagerfeld complains that his desk kept getting “buried.” To deal with the problem, he recently bought four more desks. They got buried, too. A Mac G5 computer was visible among the messy stacks of books and papers on a long table at the foot of his bed, but Lagerfeld insists that he rarely uses it and does not surf the Internet—partly because he is fearful of how it might compromise his privacy. “I don’t want to be on the Internet,” he said. “I hardly use a credit card—everything where you can be fixed. I’m floating. Nobody can catch me, mmm?”

In the now.
Where Karl Lagerfeld lives.