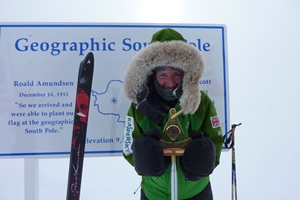 07.02.2012interviuriCristina Bazavan
Felicity Aston – on victories, solitude & dealing with friends crisis
Maybe you’ve never heard of Felicity Aston and you don’t know anything about her mental power and her strong will, but the following few minutes will be a good emotional investment and a beautiful life lesson. Great accomplishment, but about a year late to be the first. Ryan Waters and Cecile Skogg crossed unassisted completing the journey January 21st 2010.