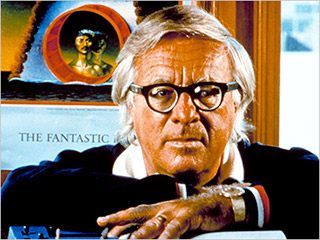 BRADBURY: Yes, I am. I’m completely library educated. I’ve never been to college. I went down to the library when I was in grade school in Waukegan, and in high school in Los Angeles, and spent long days every summer in the library. I used to steal magazines from a store on Genesee Street, in Waukegan, and read them and then steal them back on the racks again. That way I took the print off with my eyeballs and stayed honest. I didn’t want to be a permanent thief, and I was very careful to wash my hands before I read them. But with the library, it’s like catnip, I suppose: you begin to run in circles because there’s so much to look at and read. And it’s far more fun than going to school, simply because you make up your own list and you don’t have to listen to anyone. When I would see some of the books my kids were forced to bring home and read by some of their teachers, and were graded on—well, what if you don’t like those books?

You have said that you don’t believe in going to college to learn to write. Why is that?

BRADBURY: You can’t learn to write in college. It’s a very bad place for writers because the teachers always think they know more than you do—and they don’t. They have prejudices. They may like Henry James, but what if you don’t want to write like Henry James? They may like John Irving, for instance, who’s the bore of all time. A lot of the people whose work they’ve taught in the schools for the last thirty years, I can’t understand why people read them and why they are taught. The library, on the other hand, has no biases. The information is all there for you to interpret. You don’t have someone telling you what to think. You discover it for yourself.